Back from Con with news.

San Diego was great. Thanks to anyone who stopped by the table. Lots of fun times and cool announcements came from the convention but there was one somewhat sad one (at least for me). Robert announced our plans to wrap up Wolf-Man with issue 25. You can read all about it here-
http://www.comicbookresources.com/?page=article&id=22212

But don't be too sad. We have tons of awesome coming up in the remaining 8 issues. Plus this points out one of the cool things of creator owned comics, we can decide to wrap up a story at a logical end point and leave the character at a good place rather than have this type of decision made by a publisher who may or may not have the best interest of the story in mind. Anyway, while I will miss drawing Wolf-Man and company, I still have 6-7 months of work to do on the series and I am committed to make them the best issues that I can. I can't talk yet about what I will be doing after Wolf-Man, but Robert and I have been developing a new project for over a year and I cant wait to get started drawing it... Its going to rock!

Here is the cover for issue 25, I think there will be some fighting in this issue :) 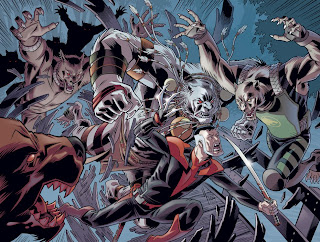 If I were a betting man, I'd be putting a lot of money on Science Dog.

Astounding Wolfman has been great, thanks for all the hard work on it. I've been a big fan, and I'm looking forward to what comes next!

yeah, you could draw the shit outta ScienceDog

I always buy my comics based on artwork first and story second and wolf-man has always been a 2 copy a month must buy. It will be missed, but I cannot wait to see what the future holds for you. THANKS!

PS- If anyone stopping by here wants to see my Jason Howard sketches hit up my myspace page liked to my name here.

Jason, will you be at the chicago comic?

You should continue the Wolf Man.

Bittersweet news Jason! I'm sad to see Wolf-Man leave but am excited to see what you guys have up your sleeves... ;)

I heard the news over the weekend. So sad. I was late to Wolfman party but look forward to your future projects and I'm glad there still be comics with Jason Howard art in them.

Thanks all. I will miss the book a ton, but I still have a few more issue to draw so its back to work for me. I am not planning to leave comics, unless I get kicked out or offer a lot of money to nap.

I will not be at the Wizard Chicago show, but I will be at the Windy City Con in Chicago in October.

Wow. Sad news indeed. However, I'm glad that you guys are wrapping it up with integrity. That is something you don't see a lot of these days! Much Respect! I'm sure that you will have success with your future projects as well! Glad the Con was a success. I'll hopefully see you at L.A.D.D. next week!

Glad to hear you had a good show, and curious to see what you and Krikman are up to next!

You should totally hit the Long Beach Comic-Con in early October!

I'm really looking forward to your new stuff, and I can't wait to read the $%@# outta the last eight issues.

Did you have any sketchbooks left over from SDCC, and if so, how can I buy one?

Is there any possible way to make you guys reconsider dropping Wolf-Man? He's just too awesome of a character to kill off. I feel there should at least be 25 more issues before he's retired. :/