Here goes! Initally we tried some other design ideas for this cover but they were bad. In trying to come up with something cooler Robert suggested the newspaper approach, I instantly I had an idea for the image and this was my early sketch. 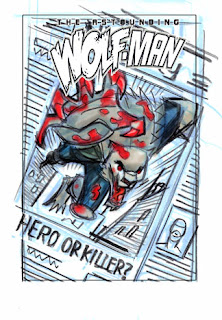 I wanted Wolf-Mans hand to really pop out and as I messed with the design more it seemed to better use the space and tuck under the logo to flip the image. I liked the left to right movement of the sketch, but I just couldn't make it work. So I changed it. Thats the best part of being an artist, I do what I want and justify it as a "creative" decision :) These are the pencils. 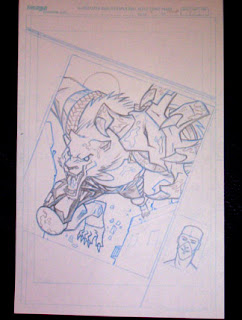 Here are the inks. Pretty much a trace job, because my pencils were so tight. I really need to loosen up with the penciling. Sometimes I do better than others, but for some reason I got pretty tight with these. Although for me there is always a little more pressure with a cover to get the lines just right, that tends to result in my tightening up. I added the text on the computer (thank you Adobe Illustrator) and for some dumb reason I changed "killer" to "villian". I also spelled it wrong. Killer sounds cooler (and is eaiser to spell) so I changed it back on the final, don't know what I was thinking here. 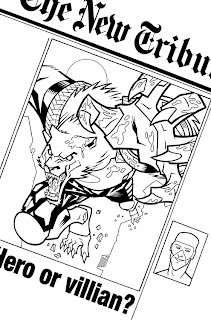 And finally the colors with all the newspaper text added. Robert wrote most of it. There is some funny stuff in there. Also some nice story bits. 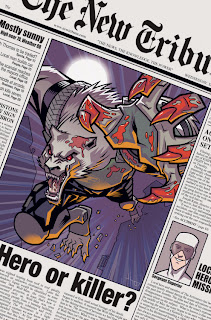 spectacular work Jason! I absolutely LOVE to see the pre-conceptual work as well as the finished product! To view your thought process as an artist/designer helps me grow creatively as well! I know they probably get time-consuming, but if you have the time would certainly like to see more of these kinds of posts. Those kinds of sketches and works was the reason I had picked up the Director's Cut #1 issue. Thanks for sharing and keep it up! Meanwhile I will keep buying!

Thanks Ben, glad you like it. I really like seeing other artists process work too. Thats why I put some of this stuff up here.